Not only ADE - the odd interview to Massimo Citro on Covid vaccines: «Get away from vaccinated people» 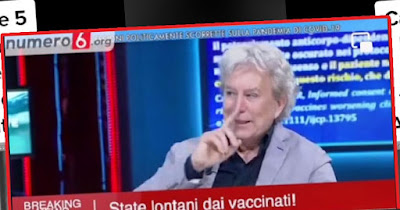 Vaccine, Thromboembolism, Stroke and ADE, here are the theories spreading within the No vax groups

Analyzing a short interview with Massimo Citro, we can review several old hoaxes about the vaccines against the new Coronavirus. The main topic of the video, shared on Facebook (previously seen on Tik Tok) is the “toxic Spike” that would be able to cause thrombo-embolism and stroke (we have already talked about that here, here and here).

Facts in a Nutshell:

The video starts with Citro answering a question from the reporter about the alleged infectivity of those who were vaccinated. «Of course – Citro asserts - even pharmaceutical companies states that: keep your distance and wear a mask». Then the reporter asks why vaccinated people are not quarantined. He too seems to have no idea on that, but keeps on talking, stating that «there are several Extended Care Units (all reported from January going onwards), where one of the doctors or nurses has been vaccinated and within a short time had infected everyone».

The interviewer then asks how do we distinguish the natural Covid-19 from the one vaccine-induced. To this point - we must clarify - we are way far beyond science fiction, as the vaccination does not induce the disease. Even Citro has to "correct" her, too bad he does it referring to another unfounded fact: «actually, infection is some specific thing, ADE is another one», He points out. According to Citro, vaccinated people would not have received the same «wild virus» discovered for the first time in Wuhan, because «in the meantime (the virus) has been changing – explains Citro – and all vaccines are then built on the Wuhan-1 sequence [...] so this is different: here’s how you immediately get the ADE». In his opinion, we should not be surprised by the occurrence of thrombo-embolisms, as these find their primal cause in the injection of “Spike”through the vaccine. Any source for that? Citro recommends asking Loretta Bolgan.

Citro talks also about people who would have had strokes due to the vaccination. How comes that Citro knows about this? "Because some of my patients told me about some of their "friends" who got the vaccine and now are lying in bed, semi-paralyzed due to a stroke. They didn't die, nobody talks about it." Moreover, among the sources there would be his "gym instructor" too.

The primary endpoint that led to the emergency approval of Covid vaccines is to drastically reduce the likelihood of ending up hospitalized and dying. This condition has been met, while – although less likely than getting the actual infection - it is possible that some of those people who got vaccination will still end up asymptomatic or with a mild form of Covid-19.

Just giving a look on the differences in the epidemic curve during the first wave compared to the current situation, or comparing countries where more people have been vaccinated with those where vaccination campaigns are still not getting to a point, is enough to get a pretty good idea. «Look Up!» someone would say. After all, if it is true that SARS-CoV-2 in the meantime has been changing, this mutation was already in progress during the testing of vaccines and we have seen that Covid variants have all emerged where vaccination campaigns had not yet begun, or - as for Omicron - there was very little vaccination. Here's an updated timeline (quote by Marco Gerdol):

We had already heard about cases of thrombi and strokes reported as post-vaccination effects due to the ADE phenomenon when this was brought up by Luc Montagnier. We have dealt with the ADE phenomenon in copious articles (for starters here, here and here). By ADE (Antibody Dependent Enhancement), we literally mean the "antibody enhancement". We are talking about a paradoxical condition where antibodies enhance the infectivity of the virus. In some cases, the immune cells themselves become targets for this response, so the pathogen multiplies within them.

ADE is a phenomenon involving non-neutralizing antibodies and has been observed in vitro and in vivo, in severe Dengue patients. Nowadays, the dengue vaccine is administered – according to the FDA – to patients who have already had the disease at least once. Understandably, these are issues that need to be taken into account. The mechanisms of ADE are still under research, and none of them has been reported in relation with the Covid vaccines. For that matter, clinical trials have taken this into account. All the presumed adverse events, such as the ADE phenomenon themselves or the Cytokine Storm associated with the inflammation that occurs within severe forms of Covid-19), are absent in all of trials phases, involving tens of thousands of volunteers, under authorization by the regulatory bodies (EMA, FDA or AIFA). Rumors that are spread into No vax circles claims that vaccinated people who got positive to Covid disease would incur in the ADE phenomenon, helping the virus to proliferate via lymphocytes. As we explained in a previous article, this thesis is lacking of any scientific evidence.

Citro cites anecdotal sources when talking about a causal link within vaccines, thrombi and stroke. He also relates to Bolgan’s studies, whose have often been revealed as completely lacking of scientific method. Bolgan sets off as a scientific consultant for many organizations that "denounce" alleged damage from vaccines, and then is involved as technical consultant at law firms. Bolgan got a Ph.D. in Pharmaceutical Sciences from Harvard. Marco Bella, Professor in Organic Chemistry and Senator from the Movimento 5 Stelle Italian Party, gave us a detailed overview on Bolgan's expertise on vaccines, during his speech at the press conference set up on January 24th, 2019 by Sara Cunial (so it was not a parliamentary hearing, that needs an initiative from Deputies or Senators in order to take place).

The conference concerned Bolgan's analysis on the presumed presence of dangerous contaminants in tetravalent virus attenuated vaccine Priorix Tetra, administered to children between 11 months and 12 years of age, against measles, mumps, rubella and chickenpox. Cut versions of the press conference, without Bella's intervention, have been shared online. The Senator was asking for clarifications on Bolgan's professional status: Doctor in Pharmaceutical Chemistry with a PhD in Pharmaceutical Sciences from Harvard Medical School in Boston. "Did Bolgan really get a PhD in Harvard?" Bella was already aware of the answer: He had a chance to contact the Institute, which denies everything.

Bella also points out that the mass spectrophotometers used in these studies would reach seven decimal points - which is really surprising, because such precision on these instruments is not available. Bolgan is unable to reply and Cunial stops Bella's speech. Professor Enrico Bucci, expert scientific studies revisor in the biomedical field, analyzed together with Professors Raffaele Calogero and Piero Carninci the two papers given at the conference, pointing out their heavy limits. On the other hand, analyzing case reports and adverse events reports in statistical relation with the normal casuistry, both technical and scientific committees have come to the conclusion that benefits of vaccinations are way far greater than the alleged risks. Example given is the PRAC, response on verification of such adverse events on behalf of the EMA.

Vaccines carry a fragment of mRNA that is used from cells to create the Spike protein. This protein is the antigen - or medium - that SARS-CoV-2 uses to bind to the ACE2 receptors of the cells, causing the infection. Vaccines stimulate Spike production and lead the organism to develop specific antibodies, at first preventing the severe forms and then reducing the virus spreading.

Can we speak about Spikes as cause of adverse events? Actually, there is really no relevant data to support this. Infact, we are not dealing with a ADE, thrombi, or stroke pandemic, but with a Covid-19 one. Even analyzing theories involving errors in mRNA genetic code, or about presumpted abnormal Spikes interactions in the organism, we have seen - by questioning experts - that these have no basis, moreover they all have in common considerable errors and gaps. And no, we cannot even argue that an alleged rush in producing vaccines led pharmaceutical companies to ignore dangerous adverse events, nor that the vaccines itself containes contaminants and/or toxic substances of some kind.

Citro’s speech is merely based on anecdotal sources. Every statement about the alleged vaccine-related adverse events is missing precise sources. Finally, he actually addresses to all of those who got vaccination the possibility of being contagious, alleging lack of vaccines effectiveness due to an irretrievably mutated virus.

This is my article translated from Italian by Caterina Lupis, Bachelor Degree in Biological Sciences and Animal Caretaker. Find the original on Open.online.

This article contributes to a Facebook project to fight fake news and disinformation in its social platforms. Read here for more information about our partnership with Facebook.

Open.online is working with the CoronaVirusFacts/DatosCoronaVirus Alliance, a coalition of more than 100 fact-checkers who are fighting misinformation related to the COVID-19 pandemic. Learn more about the alliance here (in English). 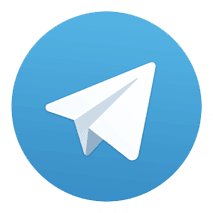 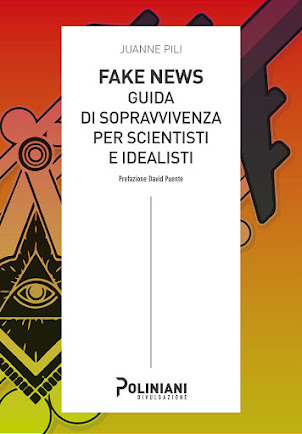 Juanne Pili
Scientific journalist. I work with Open.online I am part of Poynter's IFCN and Facebook's Fact-Checking program.